Based on a hot tip from Carrie Tribble, the Rothfels Lab set out one fine Sunday for the foothills of the Sierra Nevada. Driving through rain, we gathered at Table Mountain trailhead (in Tuolumne County) for some general (plants!) and specific (Pentagramma pallida!!) botanizing. Isaac Marck made one or two iNaturalist observations for the day.

But, enough of that; we had driven these many miles not for these non-pallida plants. We were there to see—and collect—the California endemic Pentagramma pallida! So we followed Carrie towards the base of the cliffs of Table Mountain, specifically to the—according to Abby Jackson-Gain—porphyritic (i.e., with phenocrysts/feldspar) columnar basalt and basalt rubble. Nearby associates included Pentagramma triangularis, Quercus, Aesculus californica, Toxicodendron diversilobum, Diplacus aurantiacus, Selaginella hansenii, Myriopteris covillei (?), Pellaea mucronata, Ribes speciosa, and Streptanthus tortuosus. BUT, before we even reached the porphyritic zone, Keir encountered some very strange and wonderful Pentagramma with adaxial farina growing in chaparral, under Adenostoma fasciculatum, Toxicodendron diversilobum, Lepechinia calycina, and Heteromeles arbutifolia. He immediately and provisionally identified this highly distinctive (don’t laugh) morphotype as a hybrid (homoploid? allopolyploid?) between P. pallida and triangularis! The Ploidy Gods and Goddesses were smiling on the rlab that day, so we managed to collect immature sporangia at the right stage for meiotic chromosome counts; stay tuned!

The second mountain range for the overheated but happy explorers (see Sheet 1 post) was the Mazatzals in Tonto National Forest. After camping at a very specific and special campsite along the West Fork Sycamore Creek (thank you Mike Windham!), we rambled up a dry, cactus- and Agave-laden wash. Here we finally encountered Arctostaphylos…

… and a host of other wonderful creatures. This canyon was visited years before by Mike Windham and Eric Schuettpelz, who found mixed cytotypes of Pentagramma maxonii. We found lots of P. maxonii, but only tetraploids… In addition to Pentagramma, we found Pellaea atropurpurea, P. truncata, Myriopteris yavapensis, M. rufa, and some lovely Agaves and cacti.

Next stop—poorly documented, as my camera ran out of batteries—was a bit further north in the Mazatzals for a hot afternoon walk up the Barnhardt Trail. This hike brought us to an amazing rock face with more Pentagramma (both diploid and tetraploid!!), Myriopteris lindheimeri, M. yavapensis, M. wootonii, M. fendleri, Pellaea truncata, and an outrageous Woodwardia fimbriata.

That night we camped in the Pinal Peak area, and were once again surrounded by gorgeous manzanitas.

Our last day in the field comprised a morning rambling amongst poison oak and chaparral and ferns in the Pinals, in the drainage of Ferndale Spring (!); we found

Last week, Rothfels Lab PhD candidate Carrie Tribble taught a few of us aspiring bioinformaticians/botanists/ecologists how to think (and do some things) in R. She is an excellent teacher, as she was able to meet each of us at our different levels of experience and expertise (a skill that was lacking in my past “for beginners” R workshops).

Carrie walked us through some basic R commands in RStudio while simultaneously helping us to navigate through our directories (and our own minds, as needed). She demonstrated how critical it is to understand the structure of our data, how to call up summaries and/or subsets of our data, and a bit on variables and object classes. She empowered us in how (and when) to look for help for specific R functions. Then we ran out of time.

Our first stop (after a rather sweaty and sleepless first night camping west of the Santa Catalinas) was Finger Rock Canyon in the Santa Catalinas, just north of Tucson. This was our hottest field day, but in some ways the most exciting, as we met so many new ferns and were thrilled to discover that things were not as shriveled as expected! Apparently the canyon had received some early monsoon rains, so at least some of the plants were looking lively. That first day we saw Notholaena standleyi, Astrolepis sinuata, A. windhamii, Pellaea truncata, Myriopteris wrightii, M. lindheimeri, M. yavapensis, Selaginella arizonica, S. rupincola, and finally, at about 1136m in the afternoon, Pentagramma maxonii—these collections turned out to contain both diploid and triploid individuals! Yahoo!

The Subalpine Marshmarigolds of California

I was recently invited to write an article for the Friends of the Regional Parks Botanic Garden, and chose to write about a group of plants I studied for my doctoral dissertation, the subalpine marshmarigolds of western North America. For this article I focused on the two species that occur in California, the hexaploid Caltha biflora and the allododecaploid C. leptosepala. While the hexaploid is widespread in the mountains of California, the allododecaploid is apparently very rare in California, and restricted to the Warner Mountains and High Sierra. It was fun to write in a different style than usual, and hopefully the article will reach an audience beyond the academic community!

This spot was absolutely luscious, with lots of topographic diversity, rain, mud, flowering plants, ferns, lycophytes, fungi, and liverworts. We (Forrest and Keir) found the first Pentagramma triangularis of the trip here, which rounded out our other fern and lycophyte collections of the morning nicely. I’m so grateful that this Reserve exists, and that the SDSU Field Stations make this biodiverse region so accessible for research. See previous post for more luscious photos of SMER!

In mid-January, two researchers from the Rothfels Lab, Keir Wefferling, focusing on Pentagramma (the goldback and silverback ferns in Pteridaceae) and Forrest Freund, with a focus on the lycophyte genus Isoëtes, (quillworts, in Isoëtaceae) visited three SDSU and UCNRS Ecological Reserves and a number of National Wildlife Refuge sites in San Diego, Riverside, and San Bernardino Counties. Their fieldwork took place amidst some magnificent rains, wind, and sun!

The collection trip was focused on the pteridaceous fern genus Pentagramma, and they managed to find 3.5 species: the goldback fern P. triangularis and the more or less silverback ferns P. maxonii, P. glanduloviscida, and a likely cross (allopolyploid?) between P. glanduloviscida and P. viscosa. Pentagramma currently has six recognized diploid species and an unknown number of polyploids (mostly triploids and tetraploids) formed through natural hybridization among the diploids. In order to get a better grasp of the morphological, genetic, and chromosome number variation among different populations of Pentagramma, Keir has been sampling from across the range of the genus, incorporating material from herbarium specimens and from the field. Fresh and living material collected on this trip will be particularly useful as it provides high quality DNA and RNA for sequencing work, is ideal for genome size analysis using flow cytometry, and may yield meiotically active cells suitable for chromosome counting work!

Flapjacks and tattoos in the November sun

Many of us Rothfels labfolk gathered today for a brunch in the hot November sun to celebrate brunch and autumn and plants. We shared delicious food, coffee, wine, and many (all?) of us are now rocking biologically-accurate tattoos (supervised by tattoo artist Griffin Rain). It was great to get together outside of the lab and learn a little bit more about each other; e.g., that Carl, Griffin, and Carrie all look really good wearing cat ears! The spread included an amazing veggie-coconut cream-egg bake with optional Parmesan, buckwheat pancakes, gingerbread, fruit (Vitaceae, Anacardiaceae, Rosaceae, Ericaceae, Rhamnaceae…), baked butternut squash, and gummi marine animals.

Thanks to all who made it! [not pictured: Forrest, Keir, Larkin] 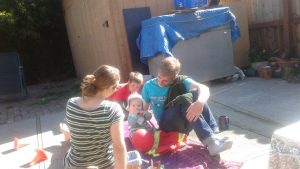 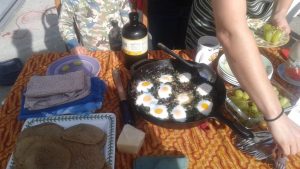 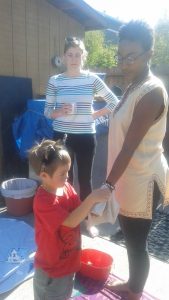 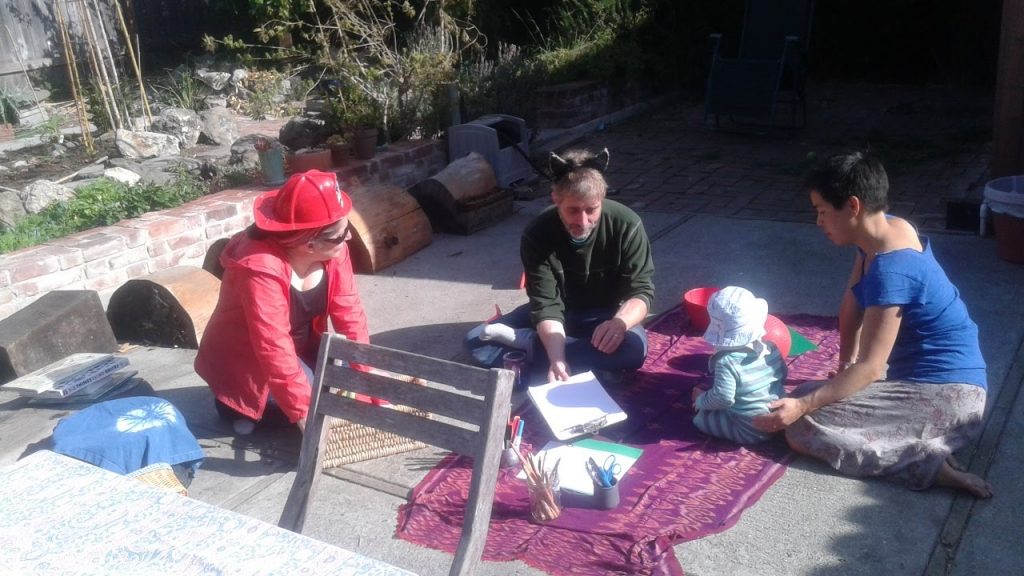 Under Alan Smith‘s tutelage, over the last few weeks I (Keir) have been learning the science and art of meiotic chromosome counting; from selecting and harvesting material at the right stage (it is so easy to catch sporangia just a little too late) to getting the right combination of blotting, tapping, and pressing, I have learned so much AND had some excellent luck! I also feel super lucky to have access to irrigated material at this time of year from Regional Parks Botanic Garden (up at Tilden)!

Today Alan and I counted our first Pentagramma tetraploid (2n = 60II)! It was identified as P. viscosa, but it looks more like a P. triangularis to me…

…we’ll see upon closer inspection what the subgenomes have to say for themselves.